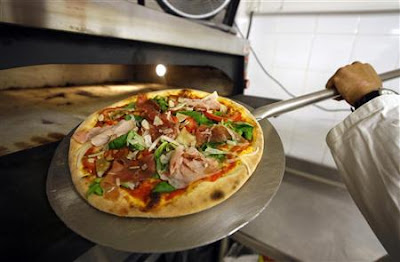 NEW YORK (Reuters) – A New York restaurateur has cooked up the most world’s most extravagant pizza — a $1,000 pizza topped with six sorts of caviar and fresh lobster.

Nino Selimaj, who runs six pizza restaurants in New York, on Wednesday unveiled his Luxury Pizza, a 12 inch (30 cms), thin crust topped with caviar, lobster, creme fraiche and chives. Cut into eight, it works out at $125 a slice.

“I know this won’t be for everyone but there are people in New York who can afford it and once tried, they’ll be back for more. It is delicious,” said Selimaj, who moved to New York from Albania about 29 years ago.

“Sure, some people will say it is just a publicity stunt but I have researched this for over a year and think there is a demand. I have already sold one.”

Selimaj said his restaurant Nino’s Bellissima, which is the only one of his restaurants to offer the Luxury Pizza, needs 24 hours notice for the gourmet dish as it orders the caviar in advance.

“But where better to experiment with pizza than in New York where people love their pizza,” he said.

If diners are still peckish after the Luxury Pizza, they can always head over to the midtown restaurant Serendipity that sells a $1,000 ice-cream sundae called Golden Opulence which is covered in 23K edible gold leaf.